How did Norwich ‘aid’ Spain? 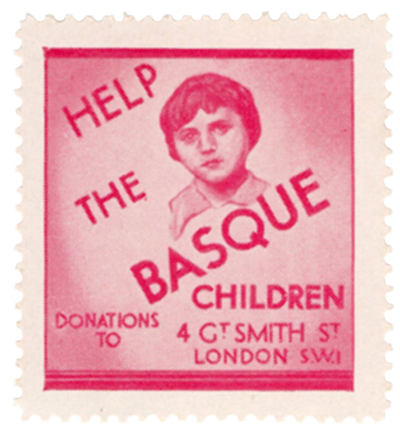 The ‘Help the Basque Children’ Cinderella stamps raised valuable funds to care for the children in the colonies. 24 stamps cost 6d. 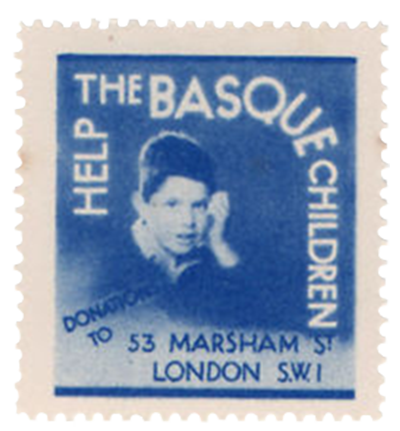 After the outbreak of the Spanish Civil War, many British people wanted to ‘do something’ to help the Spanish people, including the Basque children. Communities in Norwich and Norfolk made numerous efforts to try and ‘Aid Spain’.

Images: Cinderella Stamp produced by the Basque Children’s Committee to raise funds for the upkeep of the children, 1938. Used with kind permission of the BCA’37 UK. The Association for the UK Basque Children.

British campaigns to provide humanitarian relief to Spanish civilians typically painted themselves as neutral in order to avoid political controversies connected to the Civil War. This was typified by the Norwich Relief Fund for the Distressed in Spain, a branch of the General Relief Fund for Distressed Women and Children in Spain (whose patrons represented the main churches in Britain).

The fund sent aid for distribution to distressed civilians in both Republican Spain and rebel-held areas under the slogan: “Wherever the guilt may lie, these at least have done nothing wrong”.

Launching the Norwich branch in January 1937, Herbert Frazer, the Lord Mayor, pledged £3 3s (equivalent to about £160 today) and the Norwich and District Spanish Society raised £52 (over £2,500 today), but it is unknown how much was raised in total. 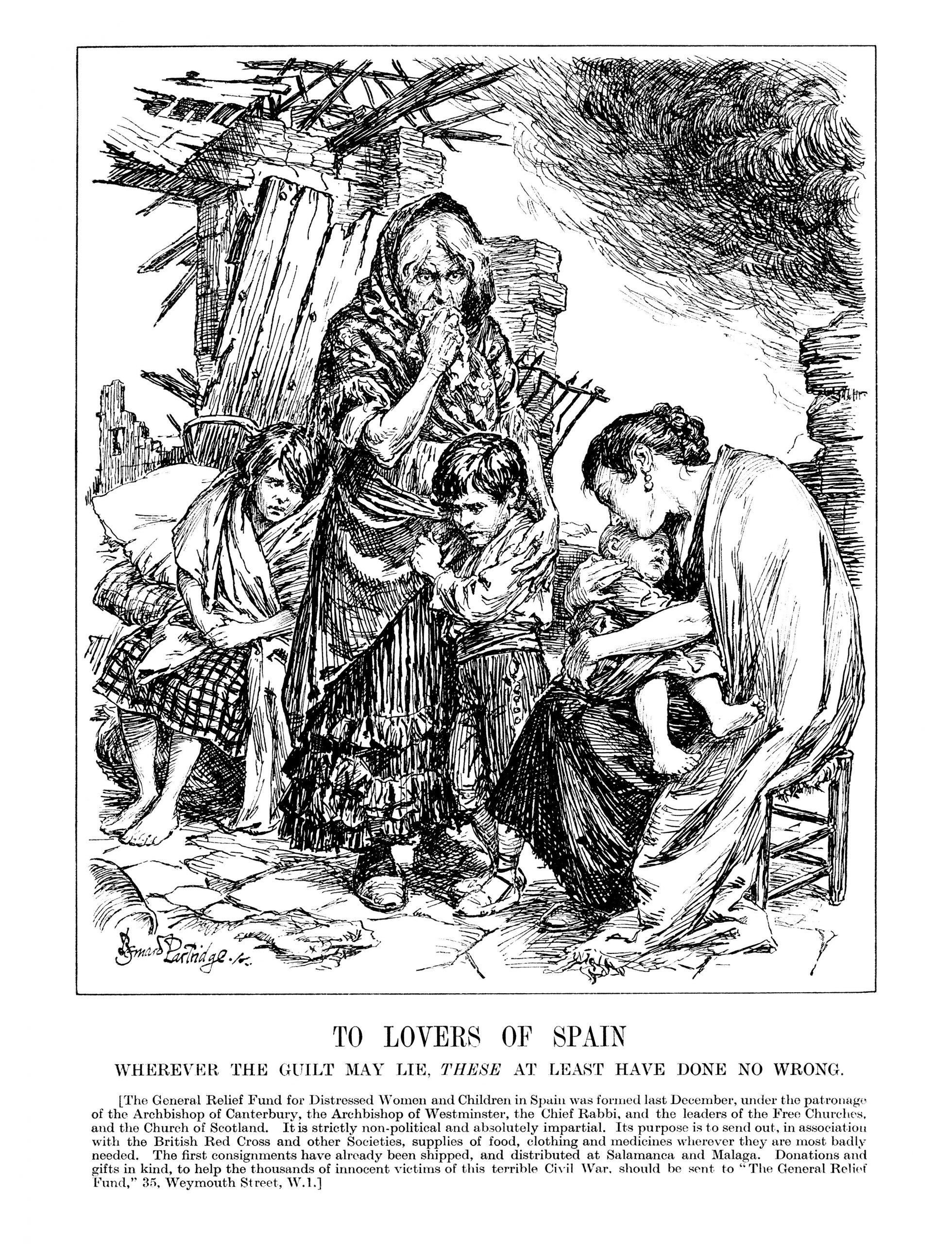 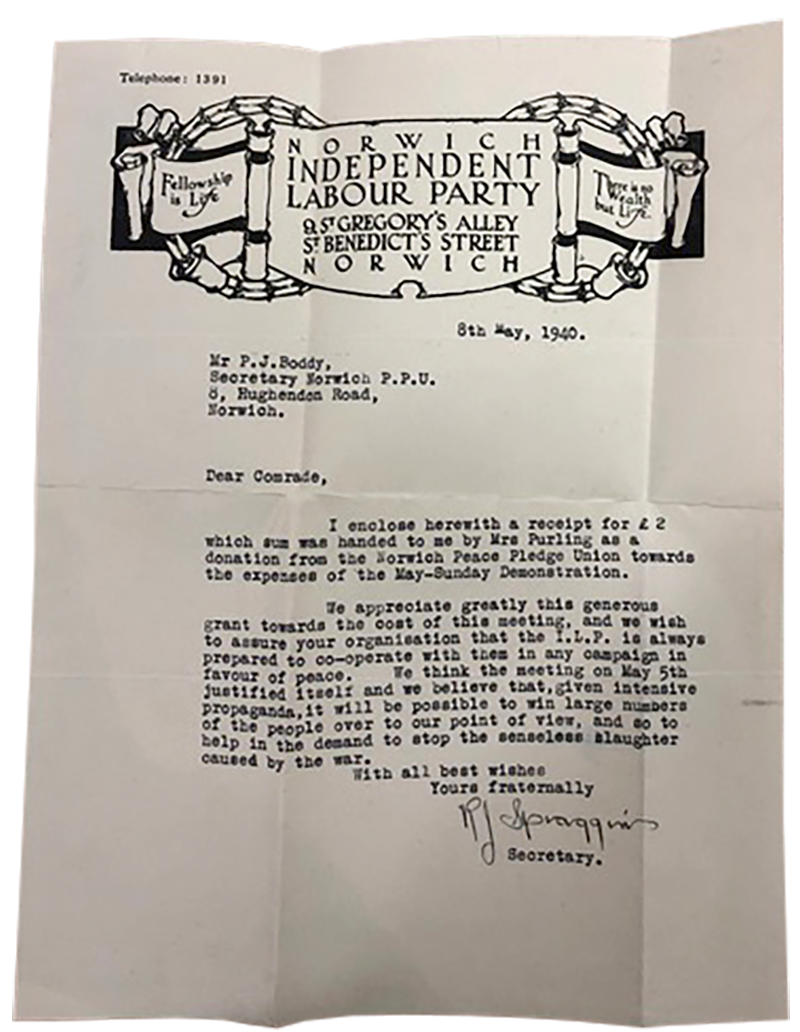 A cause for the Left

On the Left, views in Norwich reflected the wider schism between the Independent Labour Party and the Labour Party. The ILP’s stance shifted from pacificism to favouring armed intervention on behalf of the Spanish Republic. Meanwhile, Labour condemned the government’s policy of non-intervention at its October 1937 conference, but rejected armed intervention.

Image: Letter from R.J. Spraggins (secretary of the ILP in Norwich) to the Peace Pledge Union showing that the official ILP line in Norwich was to support peace. Letter: Norwich I.L.P. to P. Boddy re donation by Norwich P.P.U. to May Sunday demonstration, 8 May 1940. SF 275. Norfolk Record Office. SF 275/1, 300X6

Both points of view were represented at the 1938 May Day rally in Norwich, which was also attended by a group of Basque refugee children from the Wickham Market colony in Suffolk.

Images: Basque Children at the May Day Rally in Norwich, The Yarmouth Independent, 7 May 1938. Unknown successor copyright holder. 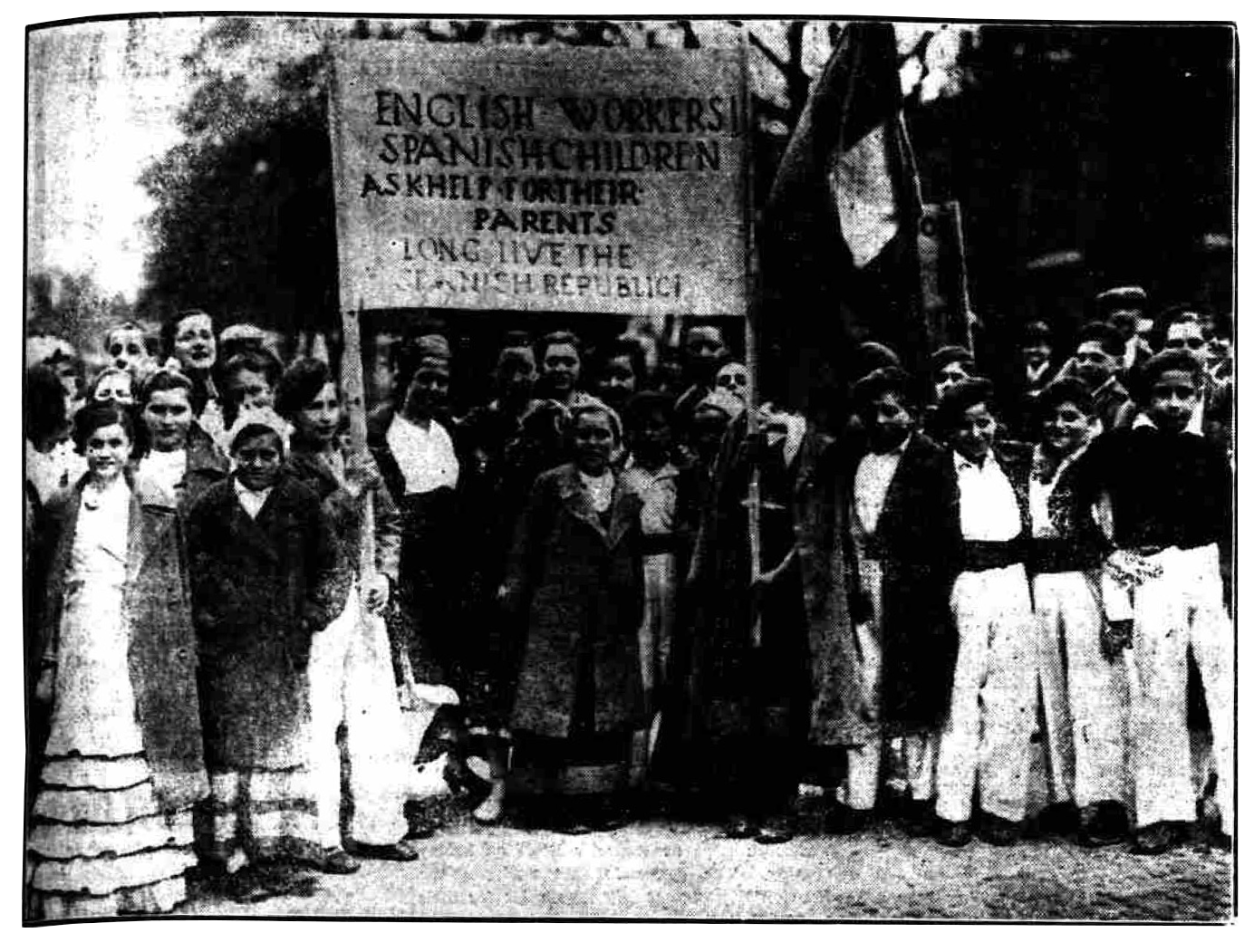 The children came dressed in their Basque national dress, sang the International and carried a Spanish Republican tricolour flag.
The children carried a banner asking English workers to help their parents in Spain. 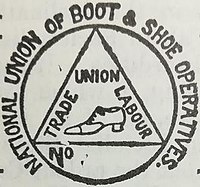 At the grassroots level, local trade union branches donated to Aid Spain causes, even when the Civil War was over; in May 1939, for example, the Howlett and White branch of the National Union of Boot and Shoe Operatives donated 54 pairs of shoes to Spanish refugees in France.

Lennie Stevenson was born in 1920 and grew up within Norwich’s left-wing politics, moving between different groups and parties. He joined the Communist Party at the outbreak of the Spanish Civil War and set out with a friend to try and join the International Brigades; they reached St-Jean-de-Luz in the south of France before being arrested and sent back because they were only sixteen! 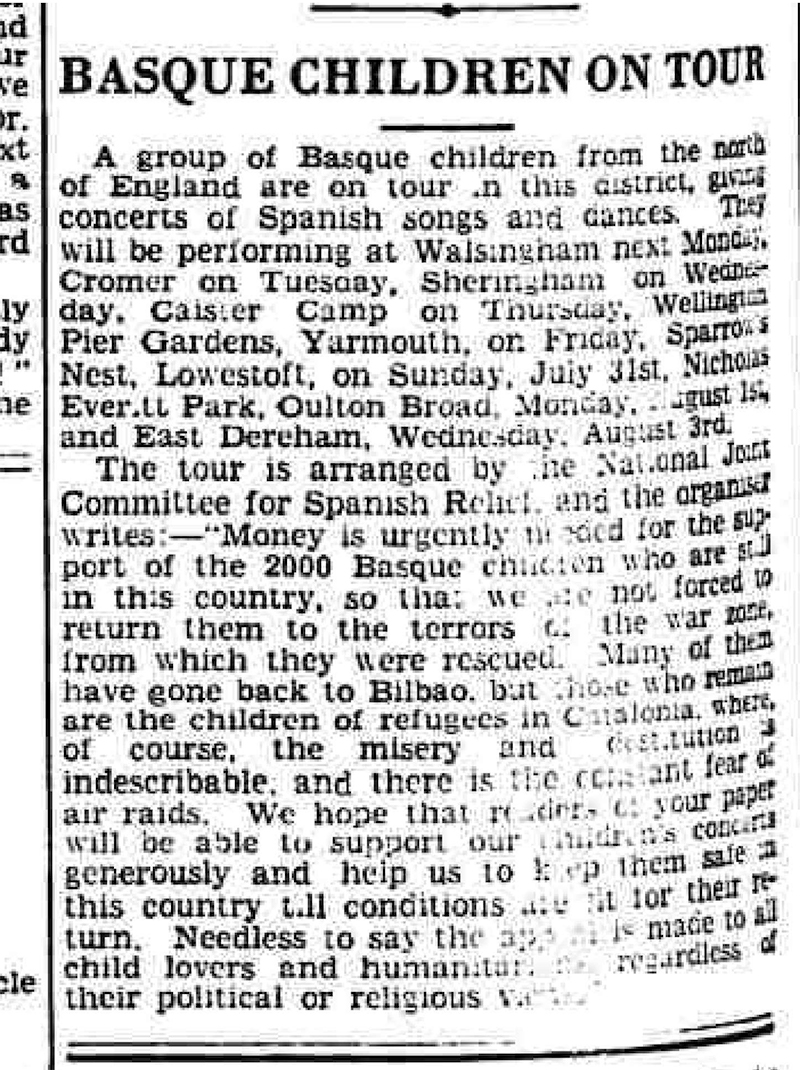 Norwich even had its own Chocolate for Spain scheme; the confectioner A. J. Caley sent regular shipments of chocolate from the summer of 1937 onwards. The idea was that the fats would help to replace what Spanish children would normally get from butter and milk.

Although Norfolk did not have a local Basque children’s committee, a number of the young refugees toured the region. They put on fundraising concerts of traditional songs and dances at Walsingham, Cromer, Sheringham, Caister, Great Yarmouth, Lowestoft, Oulton Broad, and East Dereham.

In October 1938, a conference at Norwich’s Spiritualist Hall discussed ‘ways and means of organising assistance in the city and county for the people of Spain’. The speakers included the Liberal MP Wilfrid Roberts, who was chair of the National Joint Committee for Spanish Relief and secretary of the Basque Children’s Committee, and Fred Copeman, a working-class Suffolk man who had commanded the British Battalion of the International Brigades in Spain.

After the Civil War ended in April 1939, Edith Tillett appealed for money on behalf of the Norwich and Norfolk Spain Aid Committee (which was formed in late 1938) so it could continue its relief efforts.

It raised the equivalent of over £12,000 in today’s money, through donations, a mile of pennies, and the sale of cards and flags. 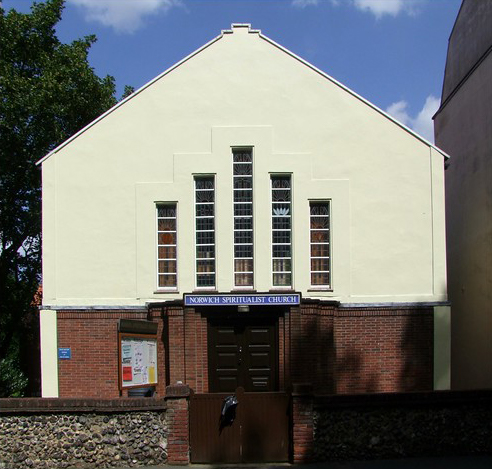 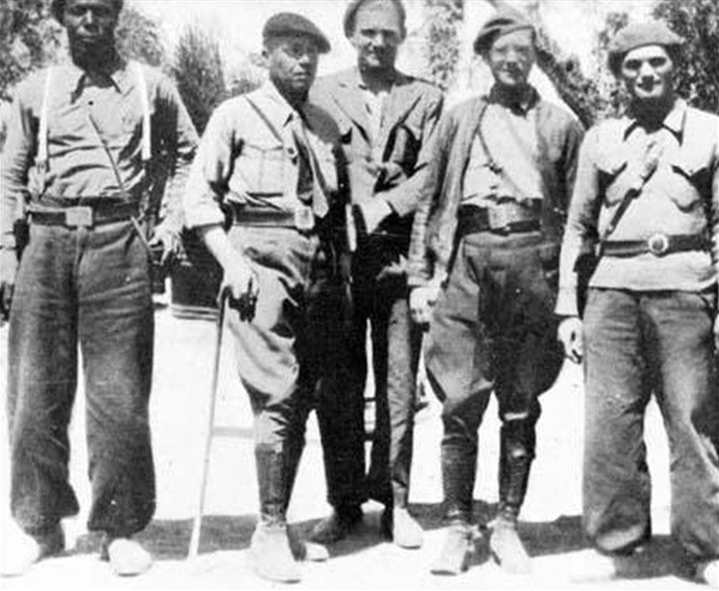