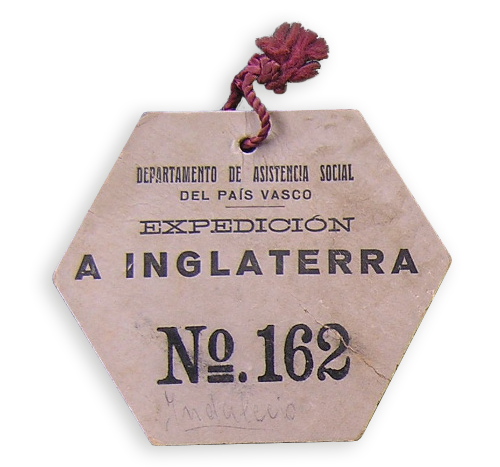 Rafael Flores was fourteen when he left his family and boarded the SS Habana for England. Before departure, he was given a cardboard hexagon with the number 162 on it to wear. This was his evacuation tag.

Like most of the other children on the ship, Rafael thought he would only be away from his family for three months. He was excited by the idea of going to England for a short time because he knew it would bring new experiences. Little did he know that he would be away from Spain for a number of years.

Image: Rafael listed as Number 162 on the list of niños aboard SS Habana. Used with kind permission of the BCA’37 UK. The Association for the UK Basque Children.

Listen to Rafael talking about leaving his family behind and getting onboard the Habana. Reproduced with kind permission of University of Southampton Special Collections.

When Rafael arrived in Southampton, he knew immediately that he was in a world very different from Bilbao.

Instead of bomb-damaged buildings and hungry people, he saw healthy, smiling people waving flags, streets lined with colourful decorations, and a band playing a tune of welcome.

Rafael left Bilbao with four other children, who used to be his neighbours. They stayed together whilst they settled into life at North Stoneham camp.

Some aspects of camp life were new and fun – the camp was equipped with electricity, a telephone, and a cinema. Rafael also learnt new skills, such as how to maintain the tents and fold their beds. He didn’t like everything about camp life, however, including having to use a latrine and having to queue up for a glass of water. The food wasn’t always too good either – Rafael didn’t like the barley and onion soup or the corned beef.

When Rafael arrived in the camp he had lost his luggage, which contained one of his favourite books: 1001 Arabian Nights. He used to look for the book every day by walking the long line of lost luggage. Eventually, he found the book. It was slightly wet, but he kept hold of it and took it with him on his next adventure. 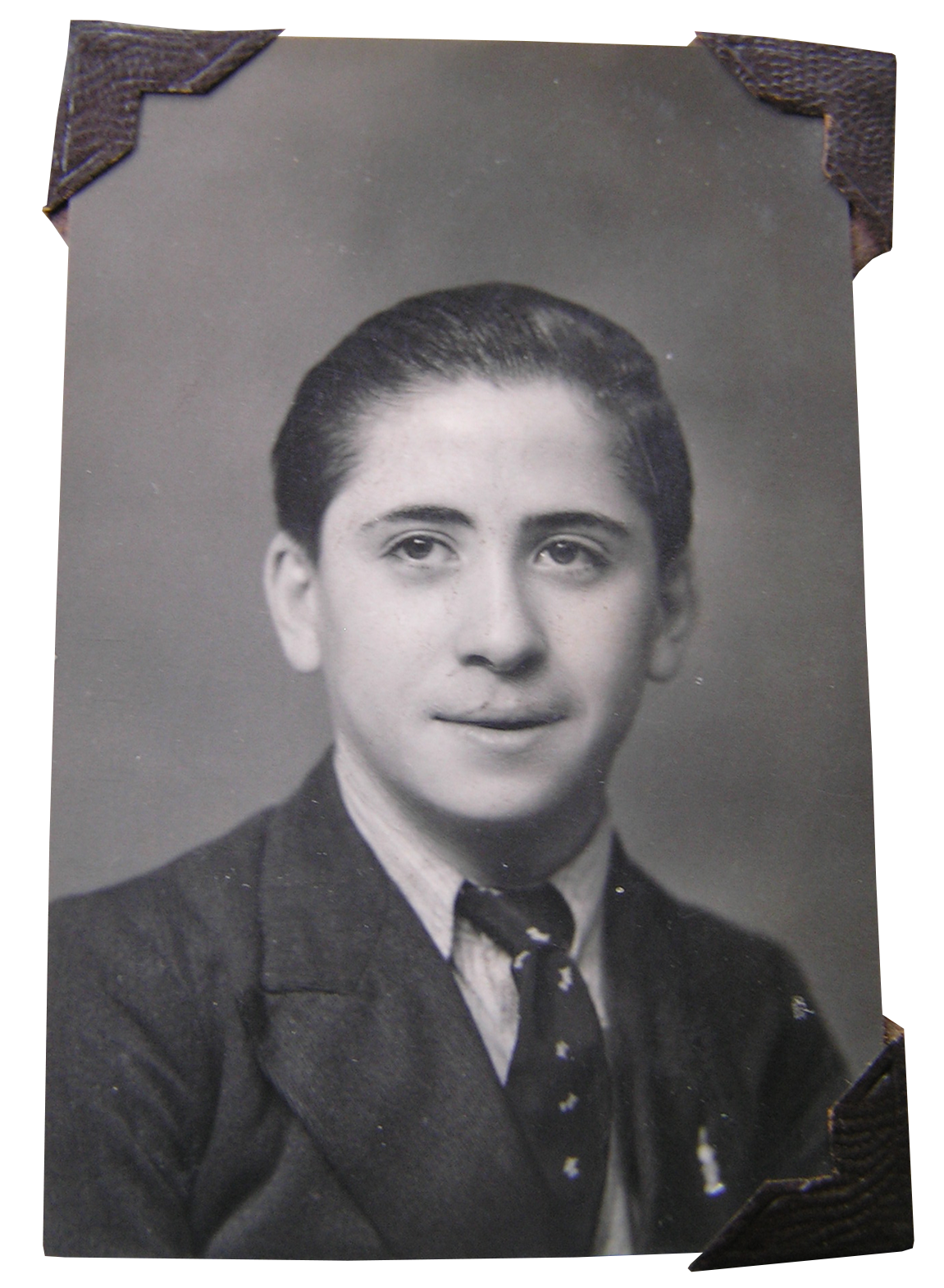 From North Stoneham, Rafael moved with some of the other children to Aldridge Lodge in Walsall. It was run by Mr John Whiston, who was a Walsall town councillor.

Aldridge Lodge was a big country house and could accommodate 50 children, aged between five and fifteen. It was next to a dairy farm and the children had access to the allotment, garden, and greenhouse. 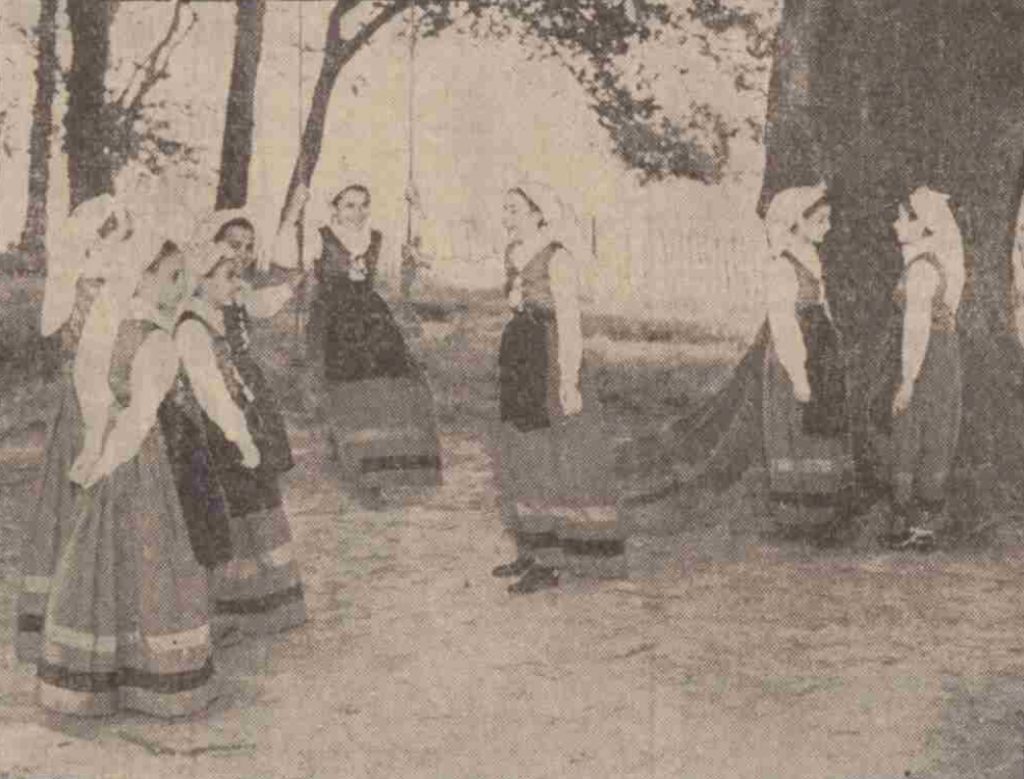 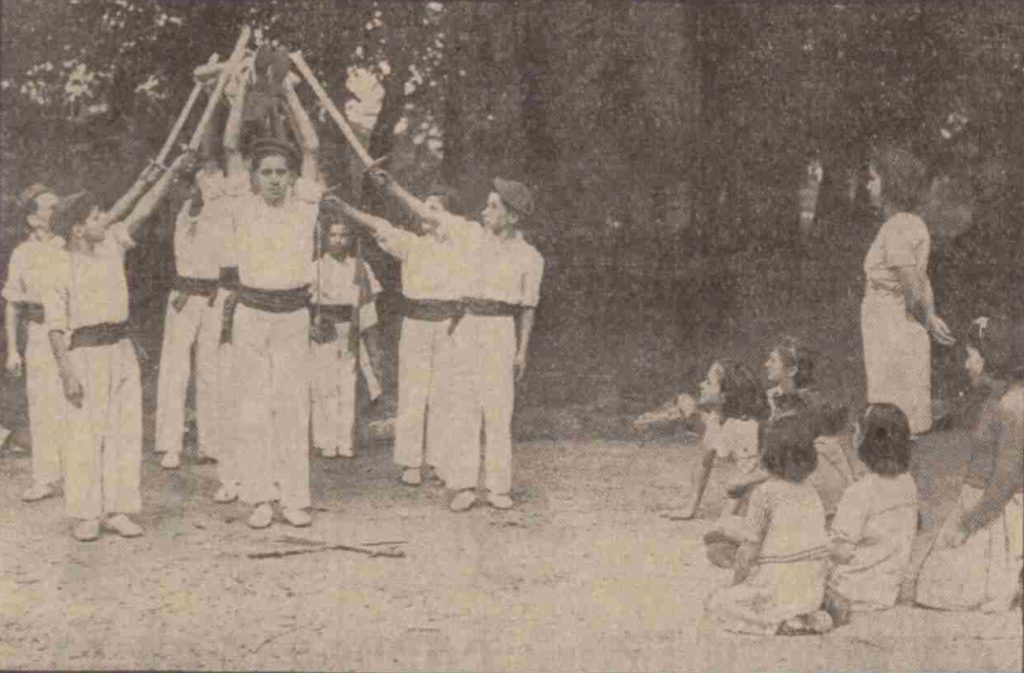 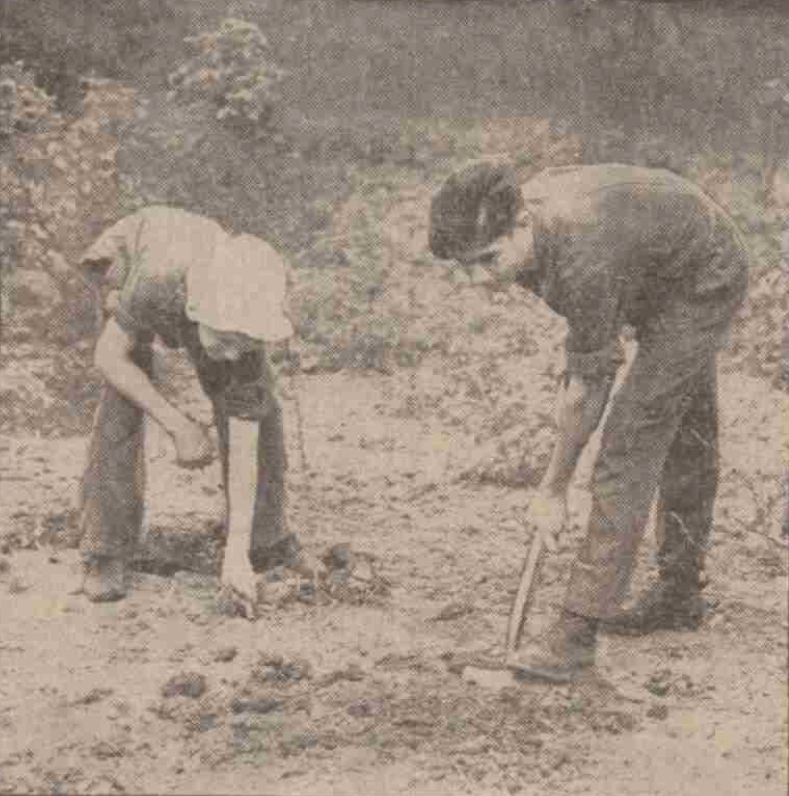 Images: Children working in the garden and allotment and dancing in the Grounds of Aldridge Lodge. ©Mirrorpix

Mr Whiston did not speak Spanish but the children picked up English quickly. The Basque children couldn’t go to the local school, so Mr Whiston organised lessons on cabinetmaking and art and crafts. The children went swimming twice a week and the young children were taught Spanish by the Spanish staff. Some of the children also worked in the garden, and the girls helped with cooking and housework and the boys helped to maintain the Hall.

All of the children loved dancing and singing Spanish folk songs. With the help of the Spanish adults, the children formed a Basque dancing group, which travelled to different places and held fund-raising concerts.

Following Franco’s victory in the Civil War in 1939, Rafael refused to return to Spain. When Aldridge Lodge – and the other colonies – closed at the end of 1939, Rafael stayed with Mr Whiston and his family. Rafael was nearly seventeen at the time and he trained to be a motor mechanic and then worked for a year or two in Walsall.

This period was also one of great sadness for Rafael: one night he was translating a letter for Mr Whiston from one of the children who had returned to Spain and he learned that his father had died.

Rafael had three Spanish friends in the Midlands and they would travel together to London to see other members of the Spanish community and celebrate Spanish culture. Being part of a Spanish community in London made it hard for the boys to keep returning to Walsall. After two or three years, Rafael and his friends moved to London and they formed a choir called ‘The Spanish Youth and Republican Choir’.  They performed Basque dances and sang folk songs to raise money for the colonies.

Background image: Rafael and Friends in Walsall. Courtesy of Rafael Flores. Used with kind permission of the University of Southampton Special Collections. 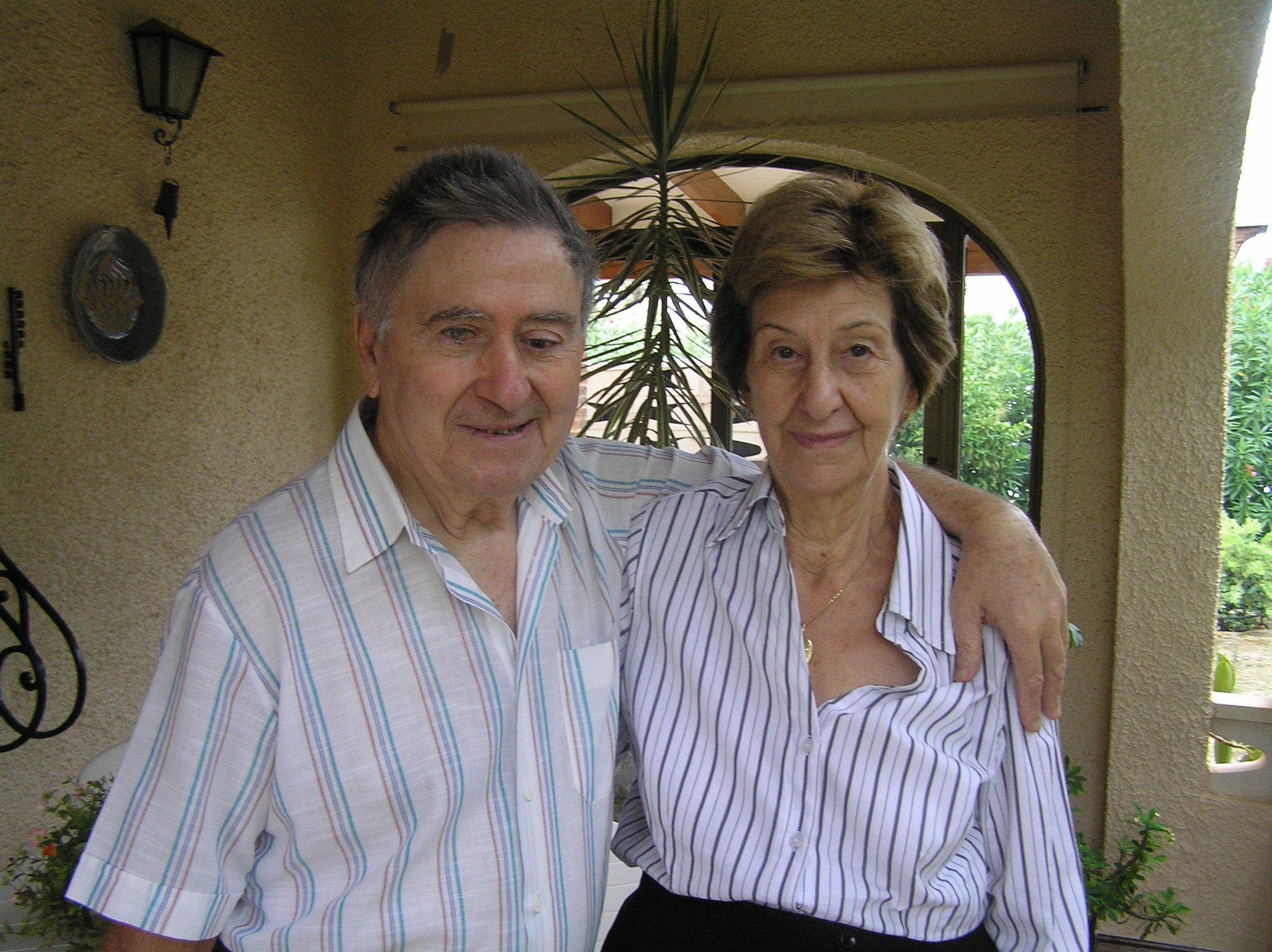 Image: Rafael and Valeriana. Courtesy of Rafael Flores. Used with kind permission of the University of Southampton Special Collections.

In 1948, Rafael married Valeriana, another Basque child refugee. Their wedding was a collective affair, with friends helping to prepare a party for them in London whilst their families celebrated the wedding in Spain; they booked a table at a restaurant and left two empty seats for Rafael and Valeriana. Rafael and Valeriana stayed in England for 50 years, had two sons, and built a home together. Even though they wanted to return to Spain, the Franco dictatorship wouldn’t allow the return of Spanish refugees. They did eventually get to see their families, though. Twenty-two years after leaving Spain, Rafael and Valeriana met their families on the bridge at Hendaye on the French border. The families were allowed to cross into France for a day and they had a picnic lunch with Rafael and Valeriana. On this day, Rafael saw his youngest sister for the first time; she had been born a month after he left Spain.

Rafael and Valeriana eventually moved to Spain in 1987 when they both retired (and the Franco era had come to an end). They were happy to be returning home, but they missed their sons and grandchildren, as well as England, a country that had looked after them when they needed a safe haven.

This research draws on Rafael’s own re-telling of his life and experiences as documented in the Los Niños oral history project, led by the University of Southampton and funded by the National Lottery Heritage Fund. Please explore our ‘Havens East’ hexagon for details of this project. Both Rafael and Valeriana have sadly passed away.